I was invited to use Superhuman in mid-March, and being a heavy Google Inbox user in need of a replacement, I signed up. Once you start using it, the app, your account manager, and the CEO (through automated emails) all send you repeated requests for feedback and opinions.

Once I’d had time to give it a good go, I took a few hours to think through the feedback, then wrote it up and sent it over. The account manager thanked me and looped in the CEO, CTO and Head of Mobile. I didn’t hear back from anyone, and the repeated requests for feedback and lack of engagement with feedback are incongruous, as are the underlying issues — all the more so when Superhuman is marketed as a product that makes the routine easier.

My own company has a cross-platform desktop app (not competing in any way!) and our products are used on macOS and iOS, so I’ve spent a lot of time over the years on native vs. non-native, etc.

I’ve been a hardcore Inbox user: bundling, pinning, reminders. I’ve tended to wrap it in Kiwi on macOS to make it easier to switch between accounts (work G Suite, home Gmail). I don't use keyboard shortcuts heavily in Gmail because I found them to be unreliable, Inbox is slow to respond, and sometimes gets in the way, meaning the wrong commands fire. So I tend to pound through my email doing GTD with one hand on the keyboard and the other hand mousing or track-padding. Outside of the mail, my Mac is pretty much keyboard driven. I regularly hit inbox zero.

I’ve lightly edited my feedback and posted it below in the form of a review, so that it might be helpful for others evaluating email choices.

Users of Superhuman are automatically signed up to a chain of automated emails that explain some of the goals behind the app. As Rahul the founder writes:

We’ve designed Superhuman to keep you in flow.

In other apps, changing recipients breaks flow— you have to switch from writing to editing fields.

My view having used it, is that Superhuman is basically an email client with a Slack-style ⌘ Cmd + K command bar, and a set of extremely unusual custom interface choices. Email with a command bar is cool, but esoteric custom interface stuff is a massive impediment to getting on with the app. The interface is further burdened by being non-native, both on iOS and macOS. The macOS app uses Electron, which makes it far from fast or light-weight, and it’s not possible to right-click on anything in the app.

Not just anyone can get access to Superhuman, and thus its appeal: it provides cachet to technology and entrepreneurial types where product access is increasingly egalitarian. If it's important that others know who you know, using Superhuman is a neat way to do that. Thus Twitter is not short of people eager to share an opinion on it, signalling they’re users.

I had the opportunity to discuss it with a few other users at Business of Software, as I was curious to see if I was alone in thinking the interface was obtuse. The exclusivity of the system does a lot to encourage people to speak highly of the app, and Rahul the founder’s post on First Round Review alludes heavily to this. Users I spoke to couched it this way: “It’s going to be a long beta…” Yes. It is.

The service costs $30 a month: another way to signal to others just how valuable your time is! For that $30, you’re able to add multiple email accounts to the service: I used it for both my G Suite work email, and my home Gmail simultaneously.

Superhuman is currently in beta, and once you’ve been invited and signed up, access is via the TestFlight app on iOS, or through a hidden download for macOS.

How do you get it?

Either the Superhuman team approach you to sign up, or you get referred by an existing user. In my case, I’d been a power-user of Rapportive, which was Rahul’s former product. Onboarding is unusual, as it’s done in the style of a higher-paid B2B SaaS app: you pre-fill credit card details in a form, book a date for onboarding, and then join a 30-minute video call to get shown how to use it. As the call starts, your card gets billed and the onboarding process is essentially adding your own email account to Superhuman live on a screen-share. If you have any confidential email in your inbox, you may be wary of this.

Assumptions on presentation of data

It’s good to take a strong opinion or two when building a product in an existing space, and use that to build something your own way. I’ve been trying to understand some of the design opinions behind SH.

I think one assumption is metadata is more important that navigational elements. Thus they hide or minimise a lot of the UI — I can’t pin the left-hand nav permanently open, for instance.

I think this is wrong. Metadata that's shown (Rapportive-style) is a distraction. Yes, for leads it’s helpful. I’ve used a Copper plugin and Rapportive in the past. But one can minimise those things, and maybe 60%+ of my email is from colleagues, machines or brands. That meta-panel is either useless or irrelevant from them. (Superhuman’s early adopters are disproportionately investors, salespeople, right? Higher % of relevance here I suppose.) It’s more functional and less distracting to have the left-hand nav there — so I can browse emails with a mouse, for instance.

I note that SH has some of the same vulnerabilities that Rapportive had: if you get an email from Ahrefs, it comes up as being from “Best Amberg Auto Injury Attorney at Ahrefs” 🙄:

There are other ways that this data is unhelpful. A user’s last tweets are shown — without context. Even if they’ve not tweeted for years. Why show me tweets from 2 years ago? These should be hidden by default — and even when shown, the date should be clear.

There are some other challenges that come with minimising UX elements. Showing people’s faces is helpful. Why not include them in the main mail view? Or at least, make them optional? Similarly, why not colour-code splits?

Also, if the design decision was to remove as much as possible and make the interface minimalist, why the clutter? The Superhuman logo, the red “what’s new indicator”, etc.? I’ve a desktop and laptop in the office, and a desktop and laptop at home. Every time an updated is posted, I have to read and dismiss it four times! 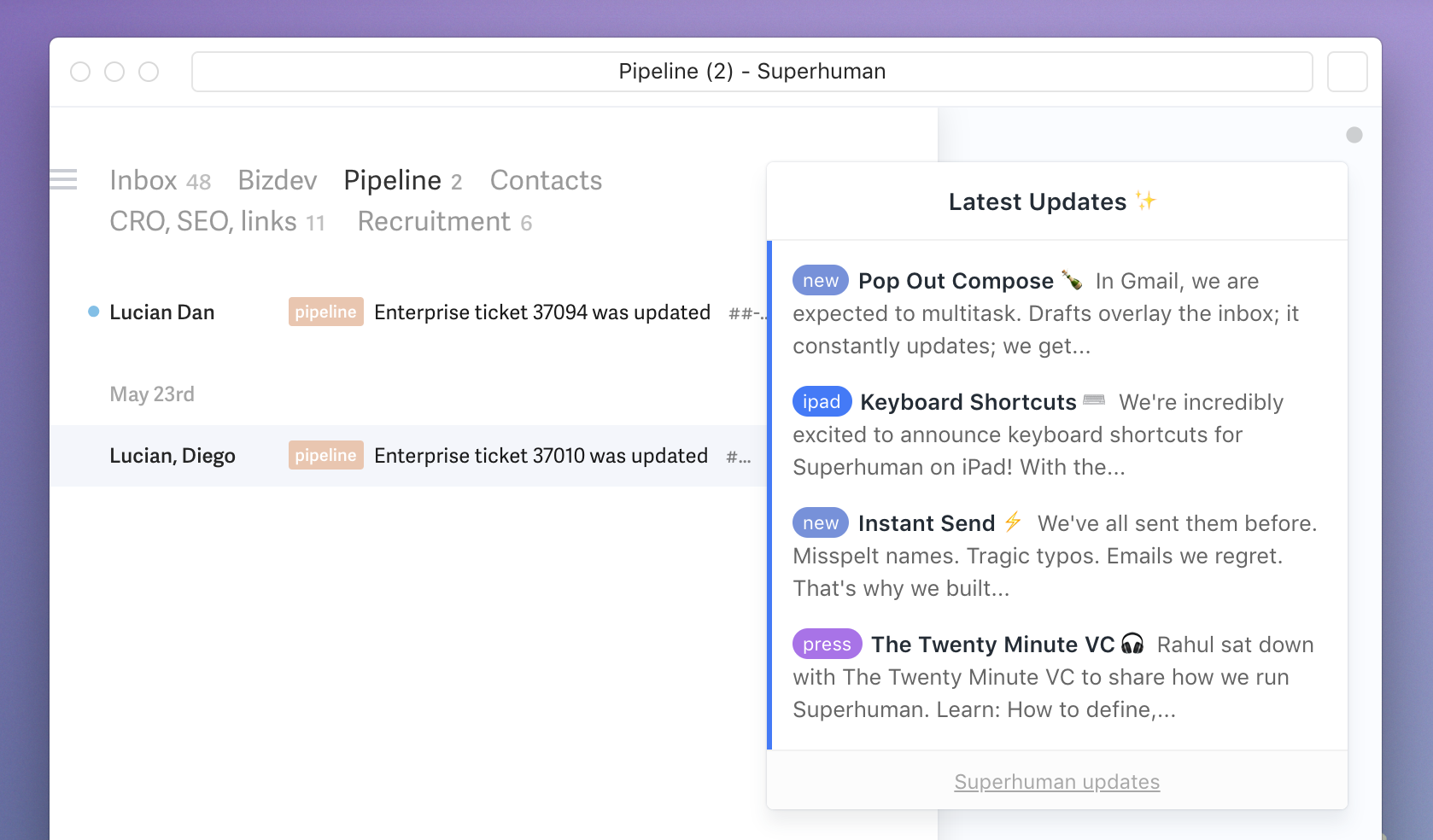 The Electron app used is pretty slow to load, and I don’t believe Superhuman have any plans to go native. I don’t massively love Kiwi, but I think what they do is interesting. They simply frame a Chrome window. By doing this it feels like an app — but it’s not nearly as slow as Electron, and it lacks a lot of the crappery (lack of right-click, etc., etc.) that Electron brings about. People sure do hate Electron.

I originally wrote this review as an email in Superhuman. It was a fairly long email, and I dragged a few images in. My desktops all have three screens — a 5K and two satellites. I’ve got a tonne of desktop real estate to be doing this, but no matter how big I make the SH window, I’m writing this email in a tiny box with a ~90 character line width, craning forward to write. (I had an eye test two months back; my vision is great.) Is it the font? The size? The narrow spacing? 🤷‍♂️

One area where a strong opinion is helpful: Superhuman exposes both “Move” and “Label” commands. Google Inbox is opinionated enough to combine these. In Superhuman, if you “move”, you’re moving email to a split and marking it as done, whereas if you “label”, you’re moving email to a split but leaving it as not done. “Move” and “Label” are not helpful names for those actions — they’re legacy.

Finally, on opinions. Gmail supports multiple document interface (MDI). You can have a bunch of drafts open at the same time. I find that really helpful. Superhuman is SDI — I guess because they’re arguing focus and flow is really important. Fair enough. But if so, why on earth does the top-nav on macOS let me run multiple different view-states of SH? By letting users spam multiple SDI interfaces… aren’t they just doing what users would otherwise be achieving with MDI?

Email grouping doesn’t really work properly in Superhuman. Let’s take a look. Emails from LinkedIn — they who bought the founder’s last business — provide a good example of it:

If Gmail had those five names and I clicked on it, I’d expect to see at least one email from each of them. If I click to open it in Superhuman, I only get the single email from Sushil. The other emails were deleted in prior days, before the email from Sushil arrived. The other emails show in the right-hand panel, but if you click on any of them you just get a white page, as below. They’re in the bin, unpurged, so it should be possible to show them. (Although you’d clearly have to indicate they were binned, if you did. And it’d be weird to show deleted emails in a thread that way.)

If I look at the email in Gmail, it displays properly:

Here are the others in the bin:

I’m confused by how the grouping stays present. Is it that Superhuman is building a name list using emails in the bin? Or is it caching a list of sender names somewhere?

If I view spam email, images are rendered. Ack! Rendering those images is what tells spammers that you’re reading and that they should keep sending. I get tonnes of crappy outreach from salespeople. Usually, the workflow is to put it all in spam, and manually check one or two, safe in the knowledge that whoever spammed me won’t see an image open recorded in their delivery tracking software. Gmail, Inbox, etc. respect this.

I wrote in and asked for a link to the privacy policy, as I couldn’t find one anywhere. It’s here, and it looks reasonable.

Superhuman's icon is a lot like the icon for Balance. Black? It’s like an icon for a nightclub or a status card: trying to to evoke status. Productivity apps are generally white with blue or green. If you reduce it to a monochrome silhouette, is it easily recognisable at a distance?

The all-caps Superhuman text is similar to Uber in trying to convey exclusivity. Uber’s culture — and why they do that — is pretty well documented. Other than FoundersCard, they’re the only other black logo people I can think of on my phone or Mac.

That said, it’s possibly not surprising that there are similarities between Uber and Superhuman’s branding: Superhuman literally is “Ubermensch” in German.

Superhuman repeatedly hit me with a massive cognitive load — enough that I kept finding myself going back to Gmail because it just felt easier and clearer. Easier to read the screen, more intuitive to click around and sort stuff out whilst juggling talking with colleagues, etc.

I think Superhuman is picking two fights that are unrelated. The first is: can Superhuman do email better by adding a Slack-like command bar into a client, making keyboard-first work, investing in top quality cross-platform clients, and building an excellent on-boarding process? I’d totally bet on that.

The second is: can Superhuman reinvent HCI with an idiosyncratic UI that disregards a lot of smart work in UX design patterns, layouts, fonts and flows that’s been well-tested, proven and that have low cognitive load? I don’t know, but picking this second fight sure gets in the way of winning the first one.