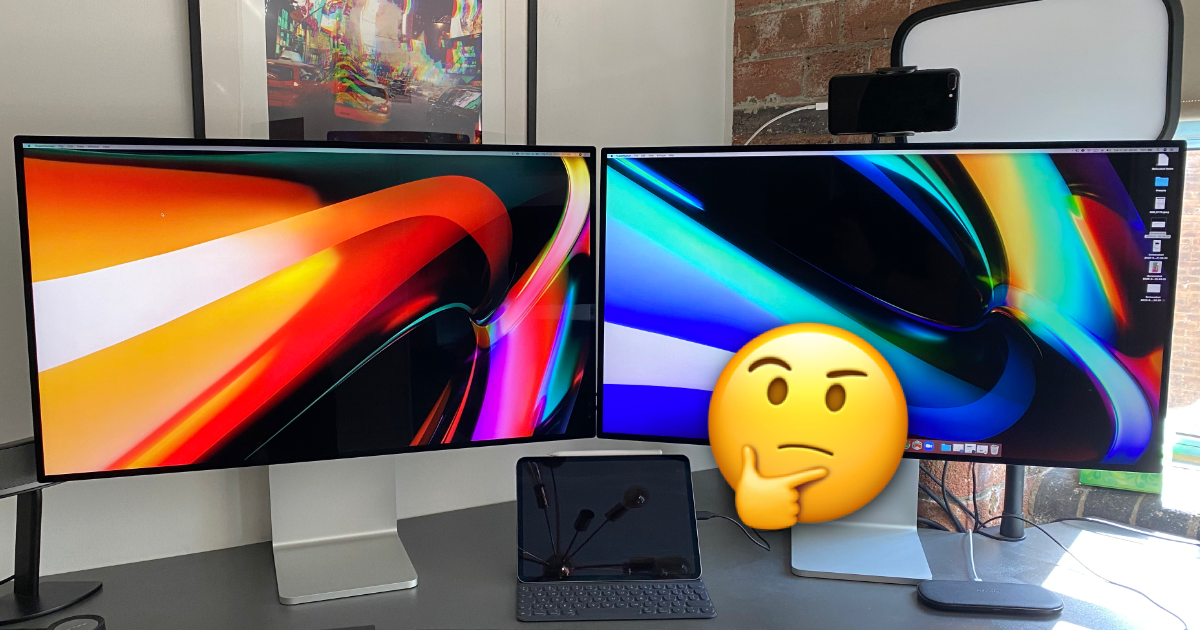 My experience trying to find the perfect screen setup in 2020. I’ve shared the pros and cons I found with each setup I tried, and because it’s still not right, and I think the right setup isn’t on the market yet…

This setup was awesome for productivity, as you could get a decent amount of stuff going on with each screen. It was great for gaming, too — vanilla enough that if I booted into Windows everything would work just great, and as a 3-screen setup it meant I had a single central screen which really matters.

The setup dated back to 2014 when they first shipped the 5K iMac. At the time, the 5K screen made me fall in love with computers all over again. I’d moved up from a classic Retina screen, and the difference was crazy. Everything looked amazing.

But by the end of last year it was a bit tired. In particular, the U2515Hs were too grainy (they’d only do 2x Retina at a pinch) and, combined with the USB hub in them that I used, they were responsible for a tonne of cables and clutter. The desk was hard to clean.

Trying to find the future with a dedicated ultrawide 2019 screen

The box was impressive — it’s about 5 feet tall on its side — but everything from the point of opening it was a huge disappointment.

First off, it’s super, super low-res for a screen of that size. It’s not even 5K — it’s 5,120 x 1,440, which is half the vertical height. So… uh… it’s really a 2.5K ultrawide. 🙄 And you really feel it. You can tile windows horizontally, but it just doesn’t have the pixels to stack windows vertically.

I’d not thought through that because of the extreme low res, it’d be non-Retina. Sure, you can double the pixel density to get a Retina effect on it, but that effectively means you’re halving the resolution, and you end up with a screen that’s 720 pixels tall. That’s like a Windows XP computer.

Let's dig into that. "Retina" is Apple's marketing speak for high DPI. Here's how it works:

When an Apple product has a Retina display, each user interface widget is doubled in width and height to compensate for the smaller pixels. Apple calls this mode HiDPI mode. In simpler words, it is one logical pixel = four physical pixels at the very beginning

So you can effectively emulate "Retina" on any screen, by reducing the logical resolution you address it with. In Apple's case, they'd render a logical 2,560 x 1,440 resolution on the iMac's 5,120 x 2,880 physical resolution. Behind the scenes it's a lot more complicated than that, of course. (Windows kinda does this with its High-DPI settings, but it's fraught.)

You can do the same thing on a CRG90, and do a logical 2,560 x 720 render to it. I used it this way a fair bit, and whilst there's no getting around the underlying graininess, it made it a much friendlier experience than just running it in stark native resolution (text and images benefit hugely, and your browser will load larger, more detailed @2x and @3x images from the web). The obvious downsize on a screen with such a comically low underlying PPI is that it makes everything even larger.

Once you get into a game and stuff starts moving it's less noticeable, but it's hugely noticeable the rest of the time. On a Windows desktop which uses a lot of single pixel wide lines it is glaringly obvious. That's why smudgy bright backgrounds look so good on these screens: it goes some way to hiding the low density.

Wikipedia's got a nice piece on PPI with a few comparables. It takes 160 PPI to get to Google's version of "medium high". Even if you were printing you'd want 150! Most reasonable modern screens are >200, as you'd expect.

As a screen worthy of 2020, the C49RG90 is just not up to it. Retina made a huge difference to using a machine day-to-day when it was released in 2012, and going back to something without it is crazy.

Because the SKUs on Amazon are so similar, I’d nearly bought a 3K variant of the screen. 5K spread over 49” is grainy enough that you can see every pixel. It’s pretty immersive in games, but if you’ve other screens in your office, it’s jarringly low-res.

Spreading 3K across a screen of the same size must make everything look like Minecraft. This is obvious: 5K on a 27” screen is a joy, but if you stretch the same horizontal res out to 49” it’s just grainy again, like running 4K on a 65” TV as a monitor — all of a sudden the TV’s not up to it.

There are some nice things about the CRG90:

…but there were a load of cons:

I stuck it out for 6 months with it to see if it’d grow on me, before coming to a conclusion. Simply put, a secondhand 5K iMac is much cheaper, much better as a screen, and even comes with an i7 on the inside. They’re not the hardest things in the world to upgrade, either.

Getting back to a decent resolution

What next, then? Well, I didn’t want to go back to the 5K iMac, because I’d got used to switching more easily between Macs and Windows, and after all, I was chasing a better resolution.

It felt like the answer’s probably north of 10,000 pixels wide, and around 2,500 - 3,000 tall. Either in the form of a single screen with the Samsung’s dimensions, or split over 3. I say 3 because 2 would result in a split right down the centre of the screen. It’d have decent build quality, no dumb OSD, it’d not use a load of cables.

After a lot of reading around, the only thing I’ve been able to find that gets close to this is Apple’s XDR screen, so I picked up a pair of them.

Together, they give 12,032 x 3,384 which is perfect. Moving from a curved screen like the Samsung was a bit weird — for a while I felt the XDRs were bulging in the middle, but that’s a consequence or staring at a curved screen for half a year.

The XDRs are… totally amazing.

I’ve struggled to find a better setup than this. Using 3 screens that were much smaller — say 27” — and which each did 5K x 3K might do it, if I could daisy-chain them to cut down on cables, and if they have super-thin bezels and no dumb controls on them, and I could get a machine to drive 3 of them. Possible something like this.

I hope sharing this is helpful if you’re thinking of taking the plunge. These setups have clearly all got pros and cons. The dedicated ultra-wide screen was worse in terms of quality, functionality and cost, relative to the 2014 setup I had. The best value for money may be the 5K iMac-based setup, but it seems crazy that a setup from 2014 would win out.

I suspect the holy grail might be a dedicated ultra-wide high-build quality 10 - 12K 49” beast, but I don't think one exists, and I suspect it might make the XDRs look cheap if it did.

I’d love to read any recommendations for stuff I could try other than the dual XDRs. I tried these options out for my home setup, but I’ve still got a 5K iMac-based office setup to overhaul at some point. 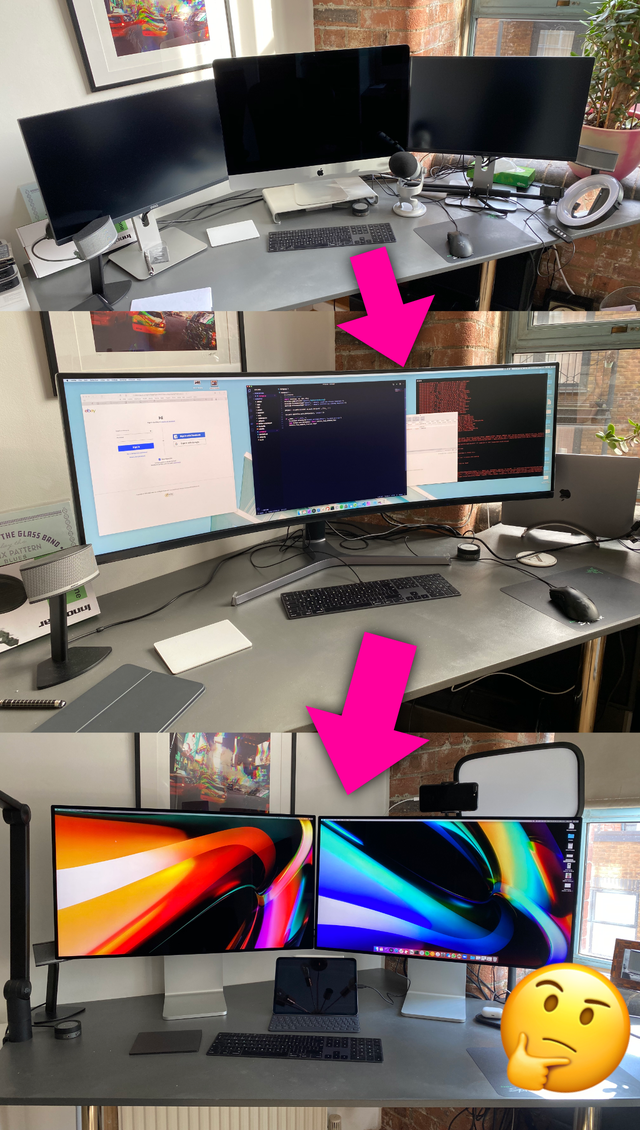